What has the American railroad industry and its history have to do with me?
The answer: A Ball watch.

All I had wanted to do when I visited a watch shop on Saturday, 29th June 2013 was to get my wife’s watch battery replaced. Thanks to a zealous and enthusiastic salesman (and admittedly a weak willpower on my part), a Ball watch was brought to my attention and subsequently purchased – the Ball Trainmaster Worldtime Chronograph.

Honestly, I had never found worldtime watch models appealing, due to a busy dial which I normally dislike. I prefer my dials clean, at the most with three counters (or subdials) and a date window. The Valjoux 7750 comes to mind. When I saw the Ball Trainmaster Worldtime Chronograph…it somehow, how would you say it…”sang” to me? 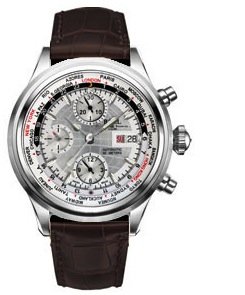 Even the seemingly deep day and date window (due to a boxy border that frames this window), which I found too deep for my liking, I ignored. Oh, and the butterfly-folding deployant buckle – not particularly my favourite – I ignored that as well.

So what was it about this watch that grabbed my attention like so? Before I go into the details, allow me to present the unboxing of a new watch…

With the great railroad heritage behind the history of the Ball Watch Company, owning the Trainmaster series makes meaningful sense, if it is nothing more than simply for its trainmaster moniker.

The Ball Trainmaster Worldtime Chronograph consists of their automatic caliber BALL 352, essentially an ETA/Valjoux 7750 movement grafted with a rotating worldtime disc, evidently described by its three subdials with small seconds at the 9 o’clock position, day-date window at the 3 o’clock position, and city names inscribed on the circumference of the dial.

Each hour marker as well as the hour, minute and chronograph second hands are fitted with self-powered micro gas tubes which aid visibility in the dark (see further explanation in End Notes below).

The watch features a shock resistance of 5,000G and is anti-magnetic typical of most Ball watches. Water-resistance is a very modest 50m-depth, obviously not meant for diving (which generally requires a minimal 200m-depth rating).

The Casing and Leather Band

The movement is encased within a 42mm-diameter stainless steel casing with a thickness of 13.7mm – rather thick by normal standards.

Truthfully, I like my watches thick and heavy, insinuating a mechanical ensemble of substance, and the Ball Trainmaster Worldtime Chronograph fits the bill.

The casing is topped off with a slightly convex anti-reflective sapphire crystal, giving a very clear view of the intricately-designed dial and inscriptions within.

The casing also featured a scratch-resistant sapphire crystal transparent caseback, providing a good view of the Caliber BALL 352, some of its 25 jewels, and the oscillating rotor within.

The screw-in crown allows for independent adjustments of time, day, date and time zone, as well as manual winding of the movement, and is flanked by the chronograph start/stop and reset buttons above and below it.

Get It On eBay
“The casing is topped off with a slightly convex anti-reflective sapphire crystal, giving a very clear view of the intricately-designed dial and inscriptions within.”

The lugs at both ends of the casing are connected to a strap made of genuine crocodile leather, a nice departure from the usual alligator-print calf leather bands on my other watches.

The buckle is a matte-finish steel butterfly-folding deployant clasp which displays the classy double-R insignia on a polished steel finish strap loop (see photos in next section below).

Personally, I do not like butterfly-folding style DB clasp due to their contact with skin and difficulty in putting on the watch, as compared to the single folding DB clasp such as the one found on my other watches. For daily convenience and comfort, I plan to replace this soon.

Setting Up the Leather Band

While the leather band on the Ball Trainmaster Worldtime Chronograph is of an odd size of 22/19mm-width, the folding buckle is of a standard butterfly-folding clasp commonly found on many other watch models.

As mentioned above, I do not fancy this style of DB (deployant buckle) clasp due to the comfort and difficulty of putting the watch on as compared to a single folding buckle, and will replace this soon. For a guide on setting up the leather band and the accompanying folding clasp or deployant buckle, see Setting Up a Watch Deployant Buckle.

“Although smartphones these days can easily give one the time for any location in the world, nothing beats taking a quick peek at an entirely mechanical watch that doesn’t run on batteries to tell the time at cities across the 24 time zones…”

The Ball Trainmaster Worldtime Chronograph presents a good selection of cities, with London as the reference Greenwich Mean Time (GMT), which I thought was a wise decision by Ball to place at the 12 o’clock position.

Cities in incremental hours from GMT are printed on each half-hour mark in a clockwise direction on the outer disc on the dial, with London (GMT), Hong Kong (GMT+8) and New York (GMT-5) shown as major cities in red, in a way representing the continents of Europe, Asia and North America respectively.

This inner disc must first be correctly set, and the world time is read by the hour number here which coincides with the city name on the outer disc. The inner disc rotates in a counter-clockwise direction as time progresses, and the black and white segments on this disc give the reader quick visual cues on whether a city on the far side of the globe is experiencing night or day.

An important thing to note: If you are astute enough and have a keen sense of observation, you will notice that the city Moscow on the Ball Trainmaster Worldtime Chronograph is indicated at the GMT+3 position.

On many other worldtime watches especially with the newer models, Moscow is shown as a GMT+4 city. See Moscow – A Discrepancy on Worldtime Watches for further explanation on this and some examples of where this variance is found on some worldtime watch models. Watch manufacturers would do well to revise this in all their current and future worldtime watches.

The Ball Trainmaster Worldtime Chronograph in silver dial and brown leather band works well with executive dress-up as well as with rugged outdoor attire (see below), hence a watch which is suitable as a timepiece both at work and at play.

Under dim lighting, the gas tubes would seem brighter and stand out more visibly over a black dial compared to the silver dial, although in complete darkness, there is no difference between the two. Time is harder to read and less legible with the hour and minute hands over the silver dial (vs. the black dial) due to a lack of contrast, although the silver dial definitely looks more elegant of the two.

With two black-dial watches in the collection, I was looking forward to buying a white- or silver-dial watch towards the end of this year, and a worldtime chronograph is no doubt a welcome early addition.

Looks like the Jaeger-LeCoultre Master Geographic will just have to wait another year. Or two.

In December 2013, I took the Ball Trainmaster Worldtime Chronograph with me on a trip to Europe and found it to be indispensable when I needed to quickly know the time in other parts of the world. This served extremely well during the times when I needed to communicate with my office back home, as well as when I had to call the US to enquire about a server downtime on my online business.

Although smartphones these days can easily give one the time for any location in the world, nothing beats taking a quick peek at an entirely mechanical watch that doesn’t run on batteries to tell the time at cities across the 24 time zones.

Looking at the watch in the photo above, the time showed 10.48 am in the city of Florence, Italy. My home city, which shares the same time zone as Hong Kong, can easily be read as 5.48 pm in the evening on the same day. A normal workday in Kuala Lumpur was just about to end!

UPDATE: As at July 2015, the Ball Trainmaster Worldtime Chronograph is sold at the retail price of RM15,500.00.

mind to share which shop did u bought from?