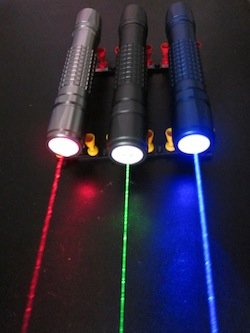 Red laser pointers were at one time popular devices used in presentations in the board room and seminars, but these days their limelight is shared by similar pointers emitting a green beam. No, that is not a typo – beam is indeed the correct word.

The human eye is most sensitive to the colour green, which is of the wavelength 532 nm in green laser pointers, and as such the beam becomes almost visible in normal dim-lit room situations, and clearly visible in the night sky. Compared to their red wavelength counterpart, green lasers appear brighter at similar power output.

Conventionally, green laser pointers are used in astronomy for pointing at stars and other heavenly bodies in the night sky. The coherent beam of light makes it easy to pinpoint objects in the sky during astronomy lectures and discussions, thanks to its brightness and the sensitivity of the human to this wavelength of light.

It is this seemingly brighter quality of green laser pointers that make them suitable for a number of day-to-day work activities.

As an ex-Resident Engineer for the construction of a private medical centre, I used a green laser pointer to pinpoint faults in construction and highlight areas which required rectification during site walks.

However, for construction site use, a higher-powered laser pointer of at least 50 mW is usually required as the normal 5 mW variety does not project a beam or dot bright enough to be seen at a distance. As construction work is normally done during the day, it helps that the green dot remains highly visible and is not obscured by the bright rays of the sun.

As a site project manager today, I use a 200 mW green laser pointer to draw the attention of my audience to features of completed buildings or buildings under construction, to the contractors and to the client and visitors.

A finger is not capable of pinpointing at the fault or object at a distance accurately enough, usually prompting further questions and explanations to describe the area. The single dot capable of travelling great distances and yet remaining highly visible is what makes the green laser pointer an indispensable tool in these work activities.

It didn’t take me long to figure that this was the best way to go about work, and I quickly provided my clerks-of-works and site technical officers with a green laser pointer each so that they could carry out their duties more effectively.

“…for construction site use, a higher-powered laser pointer of at least 50 mW is usually required…”

However, I provided them with a 10 – 50 mW laser as a 200 mW laser may be considered dangerous if used by someone without much experience working with lasers.

Some form of awareness and guidance in getting to know the laser and general behaviour of coherent light is crucial before actually using one. For my final year university project, I had to attend a seminar on the safety of laser use as I was working with a Class IV high-powered 4-watt laser. For a much smaller 50-milliwatt laser, some simple instructions go a long way.

Recently I have also provided my sales team with 5 mW green laser pointers for precise pinpointing on the scale model of the building under construction to quickly highlight to the prospective buyer and draw their attention to the areas which my sales team would like to describe and explain further.

For indoor use, 5 mW laser pointers are powerful enough for their intended purpose.

Care and Caution in Handling Lasers

Laser pointers, common in the marketplace as they may be, have to be dealt with absolute care and discretion. Although 5 mW models pose little hazard, they still need to be handled responsibly and with care. One should be aware of the injury they can cause such as temporary eye damage, before owning and using one. Be wary of where the beam is directed, especially against reflective surfaces such as mirrors and glass windows.

“Be wary of where the beam is directed, especially against reflective surfaces such as mirrors and glass windows.”

Those at 100 mW and above may ignite matches and 200 mW ones will even melt plastics. Needless to say, laser pointers with high power output, especially those at 50 mW and greater, will need to be handled with extreme care and used only where situations deem them necessary.

NOTE: With regulations getting tighter and stricter due to misuse of these devices, laser pointers are getting increasingly difficult to obtain. eBay still has them, but a 5 mW limit is imposed upon sellers. You may find it here.

[…] have many electronic devices from torches to laser pointers, most of which are high-drain and power-hungry – and the only way to run these devices […]

For the use of presentation, should a 5mW laser pointer is enough or less than? I’m afraid to hurt people around me.