Laser rangefinder – a nice thing to have? If you’re in the construction industry or simply love DIY projects, a laser rangefinder is good to have. It is an indispensable tool for taking quick and accurate measurements of long distances – simply point, shoot, and read off the LCD display.

Last year, whilst I was in the middle of the construction of a hospital, I found using a measuring tape to measure distances and heights too cumbersome and inefficient. I had wanted to buy a laser rangefinder or distometer many years before that, and that construction project seemed like the best time to get one.

I shortlisted a number of reputable brands in the market, including Leica, Fluke, Hilti and Bosch.

For the average consumer, Leica and Fluke produce specialist instruments of industrial calibre which may not be suitably priced, with basic models starting at very high prices. These are very expensive equipment due to the company’s reputation in producing high precision and reliable measuring tools.

All the models above have the following common specifications:

Get it on eBay

Ultimately, I decided to go with GLM 80. For the features and range at the price it was going for, it was the best value for money. Checking the latest pricing for all the models above, you will likely find that the significantly greater measurement range of 80 metres for the GLM 80 more than makes up the additional dollars you’d pay for it. This is when you compare it against models of the lower range.

I briefly tried and tested the GLM 250 VF as well, and didn’t like the relatively slow response it gave even for close distances, compared against the response time for the GLM 80. Furthermore, I didn’t need to take measurements at the range of up to 250 metres in my day-to-day work, and even if I did, at that range I would likely require a tripod mount and proper reflector to effectively get such measurements during the day.

Without that kind of stability and precise reflection back to the device, the laser rangefinder was likely to yield an error in reading. Anyway, the GLM 80 comes with a screw-threaded hole on the underside for mounting on a tripod for this purpose (see photos below).

So, today’s article is a Bosch GLM 80 review.

The main difference between the GLM 80 and the rest of the models, other than the obvious measurement range, is in the way it is powered. Its operation depends on a single built-in 3.7V 1250mAh rechargeable lithium-ion battery which is not removable, charged via a microUSB port on the rear of the device.

Initially I thought this was going to be a problem, but considering I never needed to remove the batteries in my more critical devices of continuous use such as the iPhone and the iPod, it shouldn’t be an issue with a device I use only occasionally to measure distances.

On a side note, I have since replaced my iPhone with the Samsung Galaxy Note II, which also uses the microUSB for charging. Although I do not recommend it, the same cable could be used to charge both the phone and the Bosch GLM 80. If I wanted to. Or if I had no choice and needed to. 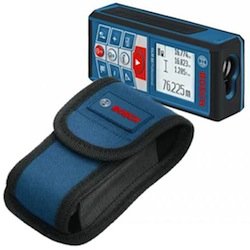 The GLM 80 also comes with a well-constructed canvas holster, providing a snug fit within and easy portability with a velcro-fitted belt loop. With my pockets usually already full, carrying the GLM 80 in its protective case on the belt gives me quick and easy access to the device whenever it is needed.

Key Features of the Bosch GLM 80

Other than being very adept at getting single straight line measurements of distance quickly and accurately, the Bosch GLM 80 is also equally capable at measuring the following dimensions and scenarios:

For taking indirect vertical and horizontal measurements at an angle:

For taking indirect vertical measurements at an angle from two arbitrary points and to quickly measure the total wall surface area:

Taking Measurements with the Bosch GLM 80

Depending on the situation, measurements can be taken from four different points of reference on the Bosch GLM 80. These reference points are changed and shown on the display at each sequential push of a button.

Other Accessories – The Rail R 60 Professional 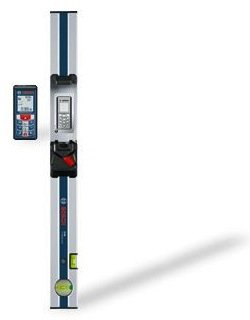 Another important feature of the Bosch GLM 80 that sets it apart from the other models is its ability to be used in conjunction with a purpose-built measuring rail produced by Bosch under the model R 60 Professional.

The 0.6 kg aluminium measuring rail of 610 mm in length consists of a hollow chamber located a third of its length from one end as a holder specifically for the GLM 80. When the GLM 80 is placed securely in its holder on the R 60, the inclinometer function described earlier comes on automatically, effectively turning the GLM 80 and R 60 into an accurate digital spirit level. The GLM 80 tilt sensor can also be calibrated by following a series of steps as given in the included instruction manual.

The Rail R 60 may be purchased separately or as a set with the GLM 80. There is only a slight savings with the latter option, so you may purchase the R 60 at a later time when you really need one.

At the moment for quick and accurate level checks, I use the GLM 80 but where a rule is required, I am still quite happy using a conventional liquid level rule.

By all means, use the Rail R 60 if your job cannot tolerate an off-level by one decimal place of a degree.

If you think you need a laser rangefinder for whatever the reason, you are probably right, and you can do no wrong by going with the Bosch GLM 80 Laser Rangefinder.

It covers a good usable range, features a host of other useful measuring programs, and is priced very competitively compared to other similar products of other makes.

I have used it consistently since the day I bought it without any regrets. Highly recommended!

Of course, if price is no object and you feel a certain loyalty to the other brands, do take a look at other suggested laser rangefinders below.

What a detailed review! My team used to have one GLM 80 Bosch device like this one. Worked like charm.

Thanks Vance! It has been 8 years and my GLM80 still works very well!