The following article is a review of the Bosch GWS 8-100CE Professional – a Bosch Variable Speed Angle Grinder, and is intended to be an info page with further description, photographs and technical specifications as provided by the manufacturer.

At the time of purchase, I have not used an angle grinder before. However, I think it’s a common enough tool that should be found in one’s arsenal of power tools.

Eager not to be left out, I thought it was about time to add one to mine. I didn’t need power, but felt that one with a variable speed would be more versatile and suitable for the kind of work I normally do.

Hence, looking for a model with a good balance between features, price and performance, I settled with the Bosch GWS 8-100 CE Professional Variable Speed Angle Grinder.

Advertisement
“I didn’t need power, but felt that one with a variable speed would be more versatile and suitable for the kind of work I normally do.”

True enough, not long after this purchase, I needed to remove a stainless steel floor trap which was cast into the concrete floor at a friend’s place, and the Bosch Variable Speed Angle Grinder made the necessary cuts for its removal.

An angle grinder like this would also be suitable for making channels into walls for embedding services. Prior to this, I had normally used the Bosch Marble Cutter followed by a chisel and hammer.

The Bosch GWS 8-100 CE Professional Variable Speed Angle Grinder has 850 watts of power housed in a compact package of ergonomically adapted casing that is not too monstrous for handling. It is equipped with microprocessor electronics for a smooth start and to maintain constant speed during operation, and provides starting current limitation and overload protection.

Like most angle grinders in the market, the Bosch GWS 8-100 CE comes with an auxiliary handle for two-handed operation, as well as an anti-rotation protective guard that remains firm in the event the cutting disc breaks.

A two-hole spanner is provided for removal and tightening of the locking nut upon installing the cutting disc. A switch above on the housing allows the free rotation of spindle to be locked to facilitate disc changes. 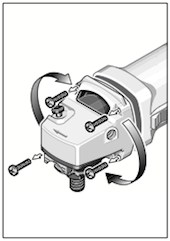 Surprisingly (at least for me), the machine head may be removed and rotated in 90o steps with respect to the machine housing.

This is done by removing the 4 screws which hold the machine head in place, and reinstalling it in the intended position (see diagram at right). This allows the user to alter the position of the power or on/off switch to a more comfortable position based on special working situations, or for left-handed use.

The motor is protected by armoured coils against sharp grinding dust, and ensure a longer tool service life. But, the best part of this angle grinder is that it is variable speed, with a knob that allows the disc rotation to be adjusted between 2,800 rpm to 11,000 rpm.

This makes the angle grinder very versatile and suitable for a more variety of grinding projects, which means it will go places where conventional angle grinders sometimes do not. 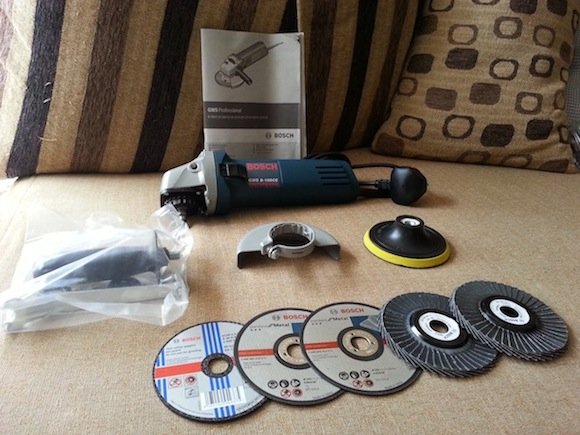 Thanks for the input and caution, Pat! 👍