The following article is not quite a review of the Bosch PSB 400-2 Hammer Drill but is intended to be an info page with some description, photographs and technical specifications as provided by the manufacturer.

The Bosch PSB 400-2 Hammer Drill is an old power tool, a really old one.

My dad bought this in the late 80s, and it has drilled into many brick- and concrete walls of a few houses over the years. My dad is no longer around – he died in 2002 – and although he never left this in his will to me, by virtue of my interests and hobbies, I believed I was the most suitable person in the family to assume next ownership.

He was very careful never to loan this tool out, as he knew no one would look after it as well as he would. And this is quite clearly seen in the photo at left – the hammer drill looks almost as good it is today as when he first bought it over 25 years ago. I carry the same credo today with my own set of power tools, to never loan them out, including this old-timer.

Advertisement
“…a red plastic drill bit diameter and depth gauge, which had proved to be quite handy throughout the years.”

I cannot remember how much my dad paid for this, but I suspect it was somewhere around the RM400-plus region. It doesn’t come in the usual hard plastic case like you’d expect to see with the drill sets of today, but the included accessories in its cardboard retail box were quite comprehensive and includes an auxiliary handle for two-hand operation, a circular rubber pad to which some bundled cut-to-size circular sandpaper could be attached to for sanding jobs, and a red plastic drill bit diameter and depth gauge, which had proved to be quite handy throughout the years.

“I carry the same credo today with my own set of power tools, to never loan them out, including this old-timer.”

At over 20 years of age, the chuck is already due for replacement. I have purchased a new chuck from Bosch, but haven’t got around to replacing it yet. When I do, it will be shown here.

The Bosch PSB 400-2 is quite unlike the drills of today, where speed control is by means of a switch usually located at the top of the power tool. Here, speed is controlled by pressure on the trigger switch – a light depress on the first level runs the drill at 2,200 revolutions per minute (rpm), and a heavier depress on the second level runs it at 2,800 rpm. 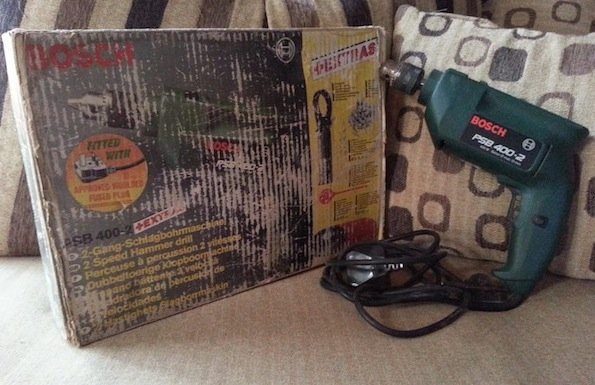 Did you ever replace the chuck on this? If so, how did you do it?
My dad was getting rid of his as the teeth had broken, so I was going to remove the old chuck and replace it. However, it seems to be completely fused to the shaft and none of the advice I’ve found online so far seems to work. I’m assuming it’s just rusted onto the bit where it screws in, but I was wondering if you could describe how it would normally be replaced. Thank you.

Hi Ethne, I did get the replacement chuck from a Bosch retailer many years ago, but never got round to completing the replacement as I had a hard time getting the old one out. I was told by the shopowner that it requires brute force and a good hammer to knock the bugger out, but I haven’t given it a second try since. I don’t have the drill with me now (I’ve just moved and it’s in a container somewhere on its way of being delivered to me), but if I am not mistaken, there’s also a screw that holds… Read more »