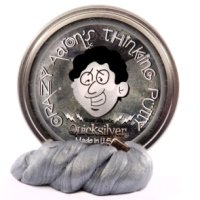 So, what’s so cool about a dough-like object that has magnetic properties? Watch the following videos to find out!

The Magnetic Thinking Putty in Action!

And here is Steve Bartlett’s attempt at putting the Magnetic Thinking Putty to “magnificent use” using time-lapse photography. Unfortunately his battery went dead before he could reach the grand finish!

The Magnetic Thinking Putty is sold at Simple Clever Toys – click here to go to their website. The venture was established by teenagers Matthew Dawson and Jacob Dawson.

In their own words, here’s their story:

“We were 14 and 16 when we began Simply Clever Toys in May 2010. We started off small by importing a few toys and reselling them on TradeMe. This small venture into the business world was rather successful for us. Deciding to set our sights higher we headed off to take part in a toy expo called Model X. We did incredibly well, selling the majority of our stock and earning a very satisfactory return. This enabled us to take the next step in our small enterprise, which was building a website so we could sell more toys nationwide and expand our business into Australia. Our growth has been rapid ever since…”

Other Variations of the Thinking Putty

At time of writing, the Magnetic Thinking Putty was sold out, obviously due to overwhelming success and interest from the public, despite its rather high price of $24.95 for a handful.

Nevertheless, for that price, you get a powerful cubic neodymium iron boron magnet, which when combined with the Magnetic Thinking Putty and your creativity, would give you hours of fun and limitless possibilities – think what you could possibly do with other ferromagnetic objects!

Discover these at Simply Clever Toys.

You could also sign up for newsletter updates to receive promotional news and discount coupon codes. Just head over to Simply Clever Toys. Oh, and they ship worldwide!

See links below as well.