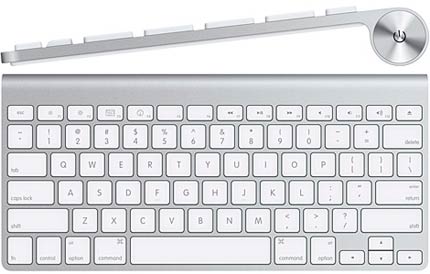 The Apple Wireless Keyboard is truly a Bluetooth keyboard that works seamlessly with your iPhone, iPod touch, iPad and other Bluetooth-enabled devices.

Sporting a sleek and thin profile, this keyboard synonymous with Apple’s consistent minimalist design. Without a numeric keypad as with most desktop versions, the Apple Wireless Keyboard becomes just a little wider than your iPad in landscape orientation, and makes transporting it in bags and rucksacks a breeze.

So yes, you could easily carry this in a tote bag, or squeeze it into a tiny laptop backpack or 11″ sleeve!

“…I had wanted to travel light by leaving the laptop at home, and was anticipating some document typing and instant messenger use. I considered a few options beforehand, from imitation bluetooth keyboards of generic brand as well as iPad cases with built-in keyboards, and found conclusively that the Apple Wireless Keyboard trumps all others hands…well, keys down rather!”

The latest version of the Apple Wireless Keyboard is also now lighter, using only two AA batteries for operation instead of three in the previous model.

The battery compartment in tubular form is cleverly located at the top end of the keyboard, hence creating a raised support to give this keyboard its appropriate inclination for comfortable typing. Batteries are inserted from the left end of this cylinder by removing a screw cap.

The power button to turn this keyboard on and off is located on the opposite side of the cylinder to the right of the keyboard.

Note that before the keyboard can be used, it must first be paired with your computing device as with all Bluetooth devices.

A tiny green light emitting diode or LED is hidden beneath the keyboard’s aluminium surface directly above the Eject button (see diagram below). This LED functions as a status and battery indicator. On initial power up, the green LED lights up steadily for 5 seconds to indicate that the batteries are healthy. If pairing with an existing device does not take place within 5 seconds, the LED blinks to indicate that it is now in Discovery mode, effectively searching for other Bluetooth devices within its capable 10 m or 33 ft radius range.

If no Bluetooth device is found in the periphery and pairing is not established in the following 3 minutes, the keyboard and indicator LED turn off to preserve battery life. At this point, you will need to press the power button again to turn on your keyboard.

I bought the Apple Wireless Keyboard just before a trip to China for a factory witness test, as I had wanted to travel light by leaving the laptop at home, and was anticipating some document typing and instant messenger use.

I considered a few options beforehand, from imitation bluetooth keyboards of generic brand as well as iPad cases with built-in keyboards, and found conclusively that the Apple Wireless Keyboard trumps all others hands…well, keys down rather!

With other generic brands, I have found texts not to have transferred to the iPad screen as smoothly, and cases with built-in keyboards often don’t have the correct key spacing for comfortable and error-free typing.

The Apple Wireless Keyboard retails for USD69 and brings to your iOS device all the relevant quick shortcuts and key-typing tricks as well as crispy tactile feel found on your regular full-size desktop and laptop Mac keyboards.