This is an article on the Kershaw Freefall Tanto SpeedSafe Assisted Folding Knife, with photos and description of this knife.

This is my first knife from Kershaw. The Kershaw Freefall Tanto SpeedSafe Assisted Folder is a little different from a lot of the folders that I already own, and its distinctive features are the reasons I bought this model.

I rarely cover the unboxing process of the knives I buy, but I’ll do it with this one.

For one, the bright red box is hard to ignore. But even then, what surprised me initially was that the box appeared longer; much longer than what I had expected the knife to be. And true enough, it is quite a fair bit longer; and not without reason.

Both ends of the box inside are tight-fit cuboid foams placed to protect the knife from impact and to prevent it from falling out through the box cover flaps.

While the box may look mundane on the outside, care has obviously been taken in the packaging design to ensure that the knife within is cradled safely. See the photos below, and then we’ll move on to the important bits of the Kershaw FreeFall Tanto.

“The Freefall Tanto blade was specifically designed this way to give the tip greater stabbing strength.”

First off, the blade is a modified tanto (one of my favourite blade styles) quite different from the angular straight-edge ones that are normally seen such as The Japanese Tanto.

Tanto blades such as this usually have two grind sections – the main one parallel along the longer cutting edge, and a shorter angled one near the tip.

In the case of this knife, the longer edge section is hollow-ground, while the shorter edge near the tip is flat-ground. The Freefall Tanto blade was specifically designed this way to give the tip greater stabbing strength. The blade is kept locked in the open position by a liner lock.

“…these knives are not considered as switchblades, and hence fall fully outside of the federal law’s definition of a switchblade.”

The blade is of an easy-care stonewashed finish. In the manufacturing process, the blade is tumbled with ceramic “stones”, giving the blade surface a rather even roughened scuffed appearance, which hides scratches quite well. Fingerprints also do not show on this rugged surface.

The fine random lines on such blades can be described as similar to the glass-fiber reinforced polymer (GRP) used in water tanks. They actually look quite similar.

The blade is made of 8Cr13MoV stainless steel, which is printed on the reverse-side of the blade (see photo above). 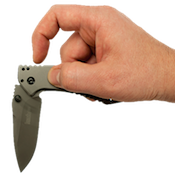 Kershaw was the first to bring SpeedSafe® assisted opening knives to market, launching a revolution in opening systems—and winning numerous industry awards along the way. Originally designed by Hall of Fame knifemaker, Ken Onion, Kershaw’s SpeedSafe knives flew off the shelves. Today, almost all knife companies offer some sort of assisted opening knife, but none matches the popularity or proven durability of the original.

The Kershaw Freefall Tanto SpeedSafe Folding Knife is an assisted folder using Kershaw’s SpeedSafe Assisted Opening technology. By applying manual pressure on the flipper in a downwards direction, a torsion bar within the handle assists to move the blade out of the handle like as if it was spring-loaded.

This allows for smooth one-handed opening with either hand, making this knife ambidextrous. It is one of the few folding knives I have that does not have a thumb stud on the blade. There is no need for one.

SpeedSafe is a patented system that assists in the opening of the blade smoothly with a manual push on the blade’s flipper (or thumb stud, for such models) and is built into many of Kershaw’s best-selling knives.

As mentioned above, the opening of the blade is aided by a torsion bar situated within the handle. In the closed position, the same torsion bar prevents the blade from opening unintentionally due to gravity of movements in the pocket and bag.

“This is my very first Kershaw, and I’m glad that my experience with it has been a thoroughly positive one!”

As the blades on such SpeedSafe knives are not deployed by a push of a button and activated by a spring, these knives are not considered as switchblades, and hence fall fully outside of the federal law’s definition of a switchblade.

Nevertheless, Kershaw disclaim on their website that it is impossible for them to be aware of every restriction in every location due to the complexity and constantly changing nature of laws and regulations, and it is the responsibility of the knife buyer and user to investigate and determine if the knife bought complies with the laws and regulations of the specific area where the knife will be carried and used.

The SpeedSafe system is so named, because:

Have to say the torsion bar is really the “miracle” feature and key solution here.

The handle of the Kershaw Freefall Tanto SpeedSafe Assisted Folder is curved and contoured to fit the palm. For better grip, this glass-filled nylon handle is partially embossed with Kershaw’s new K-TextureTM grip, made up of tiny little “k”s in Kershaw’s unmistakable tradename font.

I thought this was a very creative effort on Kershaw’s end in coming up with a distinctive grip design, and a great way to give identity and lay Kershaw’s name to an otherwise plain handle surface. Surprisingly, this was also one of the features which drew my attention to these series of knives made by Kershaw.

“The blade opens fast, especially with the assistance of the torsion bar, and quickly locks into place securely by the liner lock.”

The clip with Kershaw engraved on it, is screw-mounted on the handle pommel, and may be removed so that the clip can be designated on either side of the handle. Key-guides ensure that the clip remains firmly attached and does not rock about the screw point pivot.

The clip appears to be fashioned out of the same material as the blade, with a matching stonewashed finish appearance. While the clip may look flimsy at first sight, it is actually very sturdy and rigid, and clings on tightly to pockets and fabric.

In actual tests, I found it difficult to clip on and unclip the knife from the pocket. I suspect I’ll be removing the clip as I do with most of my other folders.

The Kershaw Freefall Tanto SpeedSafe Assisted Folder is a very easy knife to love, and a pleasure to use.

“Her left hand was still doing wiping motions on the face – it is that easy and effortless to deploy the blade!”

I couldn’t help but pass it to my wife to let her have a first-hand feel of the SpeedSafe Assisted Opening. She was holding a facial cotton in her right hand and wiping something on her face at that time, and transferred the cotton to her left hand and continued to wipe her face, at the same time grabbing the Kershaw from my hand with her right and flipping it open with one hand. Her left hand was still doing wiping motions on the face – it is that easy and effortless to deploy the blade!

The resistance of the torsion bar does makes the blade relatively more difficult to close with one hand compared to other liner lock folding knives (without torsion bars, springs or assisted opening), but with a little practice, one-hand closing becomes almost second nature.

Still, there’s little room for the thumb to depress the liner lock, making the blade release quite cumbersome and unwieldy. A push-button liner lock release such as the one found on the Kershaw 3812 Thistle would have worked wonders here.

For some reason, I never thought I’d buy a Kershaw; plus, they are not so easily available in my country. The Kershaw Freefall Tanto SpeedSafe Assisted Folder retails for just under US$40.00 at Kershaw’s website. This is my very first Kershaw, and I’m glad that my experience with it has been a thoroughly positive one!