This is an article on the CRKT M16-12Z Tanto Folding Knife, with photos and description of this knife.

I have never fancied knives made by CRKT. I have seen a couple of models at a local hardware store, and they never appealed to me enough to buy one, at least not for the price they were going for.

Sometime in early August this year, in my quest for a suitable tanto blade folder, I stumbled upon a photo of the M16 series online, which piqued my interest a great deal to give CRKT a second look. I had resisted buying one for about two weeks, but finally gave in to the temptation of buying one.

The CRKT M16-02Z had initially caught my attention, but I ultimately got the M16-12Z – the only difference between the two models being the partially serrated edge found on the blade of the 12Z.

Upon receiving the knife, my perception towards CRKT changed. I hope to own more of these knives in the future. 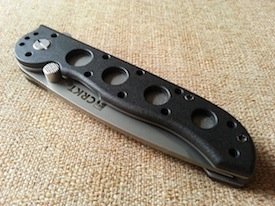 The first thing you’ll notice with a closed folder is its handle since it forms the largest surface area of the entire knife. The skeletonised design with 4 proportionally-large holes on the handle is truly striking, and is one of the design features which first drew my attention to this manufacture.

One thing I’ve noticed though is, after some time of carrying this knife around, lint from the pocket has a tendency to get trapped in these holes, and while they are harmless, it does give the knife an immediate impression of corrosion-like stains and dilapidation, at least at a quick glance.

Nevertheless, it is easy to remove with a cotton bud, and if you’re one who likes to keep your knife in pristine showroom exhibit condition, then be prepared to do some regular cleaning and maintenance.

The handle feels good to the touch, and is not too aggressively rough. The holes do add a certain level of friction in the hands.

All in all, the glass-filled nylon Zytel handle is one of the best features of the knife – certainly understated – not only is it comfortable to hold, but its colour and texture, while not immediately apparent, actually make for in large part the visual appeal of the whole knife, as many of the photos in this article reveal. 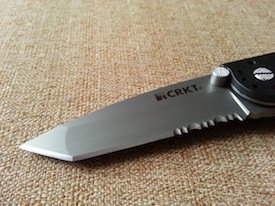 As mentioned, the knife follows a tanto blade design, after the short Japanese sword. I have always loved tanto blades, and have a few of such blades in my knife collection.

The point on the tanto cutting edge marked by the yokote or dividing line where the blade edge angles off from its straight line makes it ideal for slicing tapes and paper material. The first inch of the blade edge from the choil or heel is serrated – which should prove rigorous enough for tough materials like seat belts and rigid hoses. 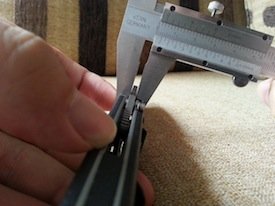 The blade on the CRKT M16-12Z is of a suitable thickness, measuring a sturdy 3.05 mm at the spine.

The length of the blade is just a little under 3 inches, which makes it a great EDC (Every Day Carry), and I suspect, legal to carry around. Or partially legal. Or illegal. Guess that depends on which state and which country. I am not about to show this to a policeman and ask. He’d probably just confiscate it purely out of wanting to own a well-crafted knife and cite me bogus law regulations in the process. 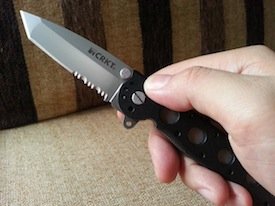 Unfortunately, CRKT chose an AUS4 steel for this model. AUS4 is a Japanese class of carbon steel with a slightly lower hardness compared to the AUS8 steel found on higher-end knives, and hence does not hold an edge as well as the higher grade steel.

However, AUS4 steel does have its advantages – it is still durable and comparatively easier to sharpen, making it suitable as a daily utility knife. 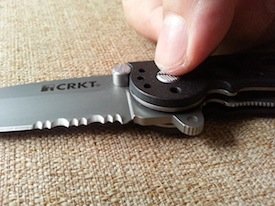 The swivel pivot is fitted with washers that ensure a smooth opening and closing action, and its stiffness can be adjusted by turning of the screw – either by slotted screwdriver, fingernail, or by the thumb itself. I found it necessary to loosen it slightly from the default upon arrival. 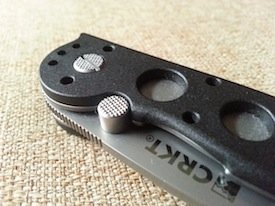 The thumb stud which is located at the usual spot on the blade, doesn’t work quite the same way as most knives with thumb studs.

Having used this knife, I have found that the blade could not be opened with my thumb in the usual way expected of a folder, and seemed to serve more as a device to limit the circular travel of the blade, towards open and close positions.

Loosening the swivel pivot certainly didn’t help, and I also tried opening the blade via the thumb stud with my left hand, presumably that pushing the blade downwards in this direction would make it easier to dislodge the tiny steel dot that locks the blade from opening – that didn’t work either.

The thumb stud however is necessary in the folding back of the blade – and is probably its raison d’être. Seems the most ideal way to open the blade is via the Carson flipper, which brings me to the next section…

The Carson flipper literally adds an interesting twist to the operation of the M16 series. The flipper is really a protrusion on the spine end of the handle when closed, and the blade is flipped open with the forefinger of either hand.

While you may unfold the blade open with two hands, the really ideal way of opening this folding knife is by flipping – not by flicking. It is so well implemented that it feels almost like it’s spring-assisted. It is not. The designer, Kit Carson, sure made a home run with this excellent design in blade deployment. 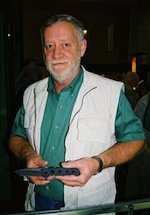 “I strive to follow form and function in the knives I design and build. My reputation has been built around solid working knives, both fixed blade and folders. All the time spent outdoors as a young man and the time spent around the world with the Army has strongly influenced the knives I create.”

Harold Joseph “Kit” Carson of Vine Grove, Kentucky, was a retired professional soldier from the US Army, rising to the level of Sergeant Major. He had made knives for 30 years and had been a full-time knifemaker since 1993. He was a voting member of the Knifemakers’ Guild. Kit had been an avid hunter and fisherman for over 40 years, growing up enjoying the woods and trout streams in the mountains of North Georgia. His philosophy of knife design is reflected in the Carson Design of CRKT’s M16 series, which is built for function, not to follow fads. This highly successful knife series was named one of the Top 10 Factory Tactical Folders of the Decade by Blade magazine. A variation of this model, the M16-14M won a comparison test conducted by Germany’s Messer magazine.

Blade Deployment via the Carson Flipper

For blade action to unfold smoothly, the pivot may need to be loosen slightly, and is best done by trial and error, until you find it at a tension that suits your preference. With the blade in open position, the flip now finds itself on the underside along the same line as the blade edge, and offers some protection to the holding hand much like what a hand guard or tsuba would do. Also, when holding the knife with the thumb on the jimping, the prevents the forefinger from moving towards the blade.

The jimping on this knife is of a suitable moderate length, extending from the thumb stud to halfway round the curve about the pivot. It provides the appropriate traction when the thumb is placed on the spine of the blade, when the knife is held with a stabbing grip in the forward direction.

In my hand, the jimping would seem more ideal if it had extended past the thumb stud by about half a centimetre, but that would detract from the elegance of the overall blade design. 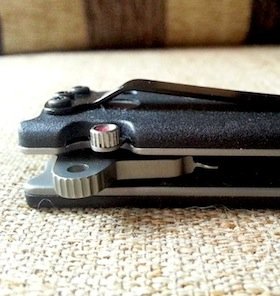 While the use of the Carson Flip is ambidextrous, the AutoLAWKS is not, and is designed for right-hand use.

I believe LAWKS is meant to signify or imply LOCK(s), and in the case of AutoLAWKS patented by CRKT, the blade is automatically locked into position when the blade is fully opened.

AutoLAWKS essentially turns this folder into a fixed blade knife when it is fully opened, without additional manual intervention by the knife user.

The Liner Lock, made of 420J2 stainless steel in this knife model, follows the popular Michael Walker design of the 1980s – the Walker Linerlock – and in conjunction with the AutoLAWKS feature when its lever slides forward, an additional metal tang rotates into place disabling the Liner Lock to be fully depressed, hence preventing the closing of the blade.

The metal tang can only be released – and the Liner Lock fully depressed – when the AutoLAWKS lever is slid back with the finger.

The belt clip is complained by some to be at an awkward location. I have found this to be ok, but will most likely remove it as I do not like clipping my knives on my waist belt or pocket, preferring to keep them loose within.

The belt clip is secured in place on the handle by three tiny Torx screws, making it possible for the clip to be completely removed, or to be reinstalled on the other side of the handle.

“This highly successful [M16] knife series was named one of the Top 10 Factory Tactical Folders of the Decade by Blade magazine.”

Overall, I find the knife to be very well designed, both aesthetically and functionally.

The knife felt very balanced in the hand, and the weight is neither too heavy nor too light – just right for a knife of these dimensions.

CRKT couldn’t have picked a better material for the handle – the lightly textured glass-filled nylon feels solid in the hand, and is visually compatible to the hollow-ground bead-blasted finish tanto blade in grey!

The Carson flipper adds the finishing coup of achievement – one of the best blade deployment mechanisms I’ve ever seen. The blade opens in my hand in under a second! 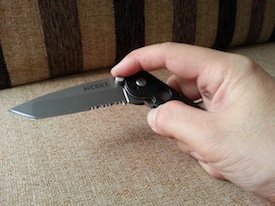 Disengaging the AutoLAWKS takes a little practice, and I was eventually able to close the blade in less than 2 seconds.

However, I still find the AutoLAWKS feature to be quite unnecessary for a folder, as I have found the liner locks on most of my other folding knives to be reliable enough without an additional locking mechanism.

The hassle of an additional step in closing the blade is hardly justifiable, in my opinion.

While AUS4 steel is suitable for certain use and purpose in mind, the blade would have been likely more ideal if it were of AUS8, 440C or 154CM, which is consistent with higher-grade knives.

“The design of the Carson flipper and the red-dotted AutoLAWKS Lever in front of it seems to be inspired by the hammer and safety on the slide of a Beretta 92FS, but that’s just my guess…”

Nevertheless, there are other models in the M16 series which uses higher-grade steel, and one may choose a different model for the desired steel grade. AUS4 then, must be the manufacturer’s design intent – for greater daily utility purpose and ease of sharpening.

Having said that, I respect the decision made by CRKT to use this grade of steel, and I am happy to add this excellent tanto folder to my collection. 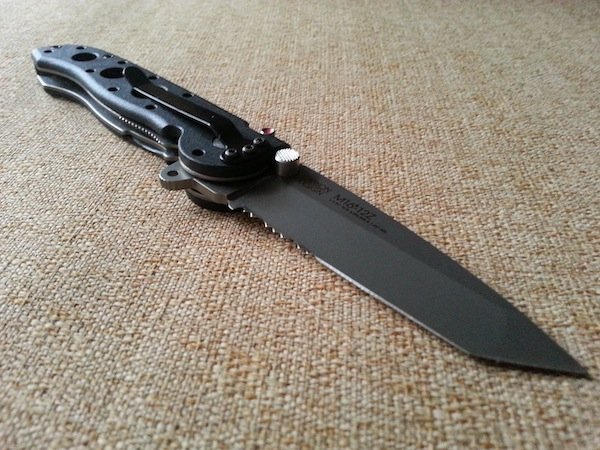 OTHER KNIVES BY CRKT

OTHER TOOLS BY CRKT

Did you order this online? Amazon? Do they ship to Malaysia? So far I managed to get some items eBay.

Yes, I bought this via eBay, for US$42.95. Shipping was a little under US$9. Just make sure it is via registered mail with a tracking number – it should arrive safely at your doorstep. The Amazon links given above seems cheaper by a good margin though. Do shop around… 😉