When I first came across the Dyson Supersonic hair dryer, I thought it was something I’d like to have. That is, until I saw the price. At ten times the price of regular hair dryers, this was no ordinary hair-drying contraption. 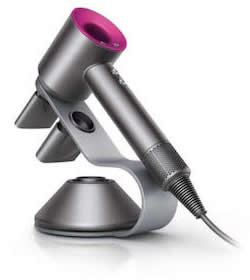 Design-wise, it is beautiful…nothing less you’d expect from a Dyson. I could truly appreciate it for what it is. Nevermind that I don’t use hair dryers…ever. I conjured up a plan to eventually have one at home, and it went this way. I learned all the great features about the Dyson Supersonic hair dryer, spoke to people who have used them, found out the many ways on how it is better than a conventional hair dryer on paper and in use, and then finally made the pitch to my wife and convinced her that she needed one. And she was sold!

Before we get to the features of the Dyson Supersonic, we should take some time and savour the packaging of this product. Some effort had been put into the box and organisation of product items within, which is quite similar I would say to that of smartphones, although leaning slightly more towards Android than Apple. Just a quick gander, we won’t spend too much time here. 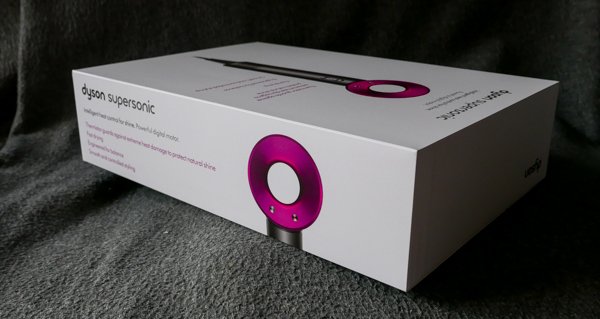 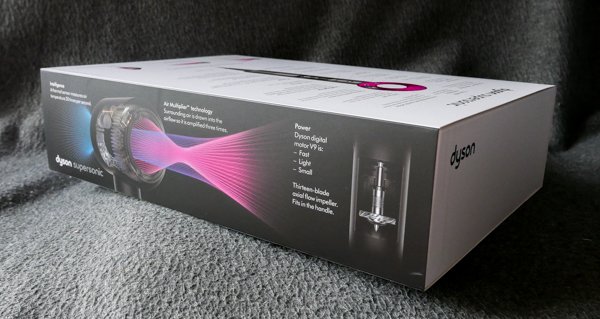 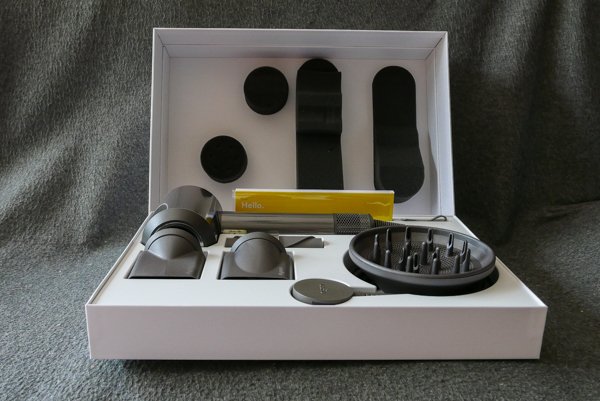 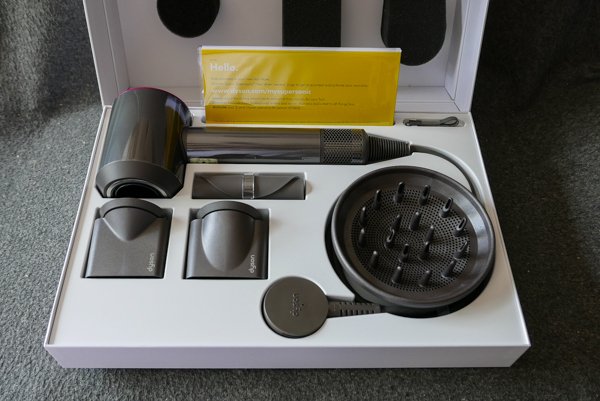 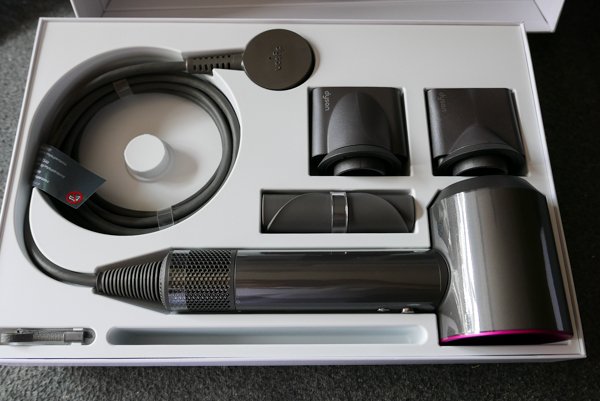 Little did I realise too much time had been spent on the box. Moving on… 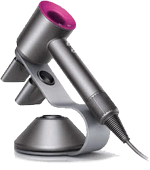 Like the bladeless fans that Dyson are famous for, the Dyson Supersonic hair dryer employs the same Air MultiplierTM technology where the volume of air drawn in from the handle base is amplified (three folds in this case) at the head, thus producing a high pressure and high-velocity jet of air. This is what differentiates the Dyson Supersonic from conventional hair dryers.

The Dyson Supersonic is also equipped with pulse-width modulation that enables precise control of the heating element and protects it from damage.

The kit comes with three accessory attachments that make the Dyson Supersonic a multi-functional hair dryer suitable for different blow methods and hair types. The function of each of these styling attachments are described below in text and on video. 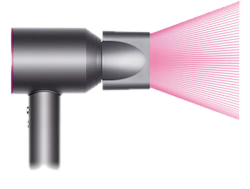 SMOOTHING NOZZLE
The smoothing nozzle emits a gentle, low velocity air flow that dries and styles the hair at the same time. 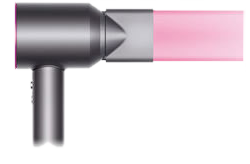 CONCENTRATOR
Similar in form at the smoothing nozzle except for a shallower and more abrupt intake throat inlet, the concentrator fires a high velocity and precise air flow for controlled hair styling focused at one section at a time. 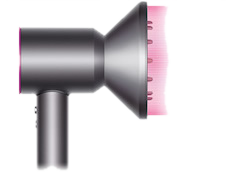 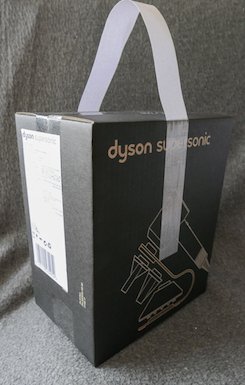 The Dyson Supersonic doesn’t come with a stand by default and was designed to be placed on the included silicone pad on your dressing table.

This display stand is an additional US$100 (RM369) and for a bent piece of steel, at roughly 25% of the price of the main kit, it is quite an expensive accessory. To give it some credit (and to justify my buying it in the end), it is fitted with magnets at the appropriate areas to keep the accessory attachments neatly organised in place.

It is also sturdy and of a suitable weight, and keeps the Dyson Supersonic poised and ready for deployment on the dressing table. Expensive as it may be, I thought it was necessary to have.

An elegant hair dryer as beautifully designed as the Dyson Supersonic would certainly look quite indecorous when laid flat on the dressing table, with or without its silicone pad.

The Dyson Supersonic was designed to be easy to maintain by even the most novice of users. The small but powerful motor sits within the handle keeping the unit well-balanced with a low centre of gravity, and it is through the base of the handle that air is drawn into the hair dryer.

Over time, dust and lint may find themselves covering this filter and impeding air flow. Dyson have made this part user-serviceable and easy to clean and clear.

I decided to run some tests to see what the Dyson Supersonic was emitting in terms of noise level and temperature compared to most other regular hair dryers.

The test was carried out in the living room where all doors and windows were shut for a controlled noise and indoor space environment. No appliance, including the ceiling fan or air-condition unit was turned on, and hence noise level and air temperature within the room were stable.

All noise levels recorded were ambient and non-directional (as shown in photos below) as well as directional (Sound Pressure Level meter pointing to the hair dryer, not shown).

Readings for current noise level, air temperature and relative humidity were taken at the start as a reference point, and further readings of these three parameters were taken until the readings started to slow down or stop.

All three parameters were recorded at 20 cm (8 inches) from the hair dryer (about the same distance from a person’s head) and for the different settings on the Dyson Supersonic, as given below.

At the highest heat setting, the Dyson Supersonic operates at about 72 degrees Celsius, emitting very dry air at 13.22% relative humidity. When coupled with the highest air flow setting, moisture and dampness can be removed very quickly from wet hair, with dry air and convection air currents expediting the evaporation process.

“Studies show that continuous or prolonged exposure to noise levels above 85 dBA can be hazardous to one’s hearing.”

According to the National Institute of Deafness and Other Communicative Disorders (NIDCD), sounds of less than 75 decibels, even after long exposure, are unlikely to cause hearing loss. However, long or repeated exposure to sounds at or above 85 decibels can cause hearing loss. At the highest air flow setting, the Dyson Supersonic operates at only 74.3 dBA, which is relatively much lower compared to conventional hair dryers which emit a noise range of between 86 to almost 100 dBA according to this study of 9 hair dryers.

Using a low-noise hair dryer that gets the job done faster means being exposed to lower noise level for a shorter period of time. I am quite sure not many people would consider one hair dryer to be a “healthier” option than the next, but if there were a reason to, the Dyson Supersonic would certainly be a candidate.

“Of course it looks different. But it’s not until you use it that you discover just how differently it works and behaves.”

– Akin Konizi
Four-time Winner of British Hairdresser of the Year

My wife has been using the Dyson Supersonic almost every single day for a month now, and has given very positive feedback on its function and efficacy as a hair dryer. Right out the shower, her hair now takes half the time to dry, and the Dyson Supersonic doesn’t cause frizzing compared to the hair dryer she had used before. Due to the low noise, she also doesn’t need to turn off the hair dryer to pass me a quick word and vice versa.

The multi-speed and multi-heat level with option for cold shot also makes it a highly versatile hair dryer. You just cannot compare the Dyson Supersonic with other regular hair dryers because they are leagues apart in terms of both function and form. Think in terms of a tablet versus a laptop, and why you won’t complain paying three to five times more for the laptop. At US$400 (RM1,699), the Dyson Supersonic is quite expensive, but for something that is used daily, we agree it was a worthwhile purchase.

Still, with all the great features it brings to the table (and your hair), it is more a nice to have than a need to have.

The Dyson Supersonic has been out for a few years now.

A lot of effort had been put into its development – a team of 103 engineers, scientists and hairstylists had spent over 4 years with a total investment of £50 million in the research and development of the Dyson Supersonic. This included the establishment of a state-of-the-art laboratory dedicated to studying the science of hair, its structure, styling, how it reacts to stresses, and how to keep it healthy, involving a total of 1,010 miles of real human hair ranging from different ethnic types and hair thicknesses.

As Four-time Winner of British Hairdresser of the Year Akin Konizi said, “Of course it looks different. But it’s not until you use it that you discover just how differently it works and behaves…” 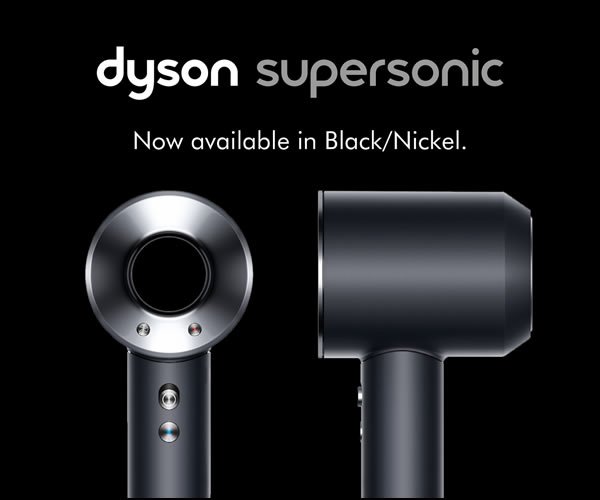 From this Dyson Supersonic review, we award it top marks!

Personally I love my Karmin dryer is perfect