People are living with ever increasing number of electrical appliances these days, and none more so than found in the living room.

What used to be space for only the tube is now occupied by flat panel LED TVs, DVD players, satellite decoders, media players, AV amplifiers and HiFi equipment. With all these appliances in one area, it’s not surprising to find the living room coffee table cluttered with remote controls of all sorts. Take a look at my living room for instance:

Comes the universal remote control to save the day.

I have been happily using the Logitech Harmony 300 Universal Remote for a while now, and have relegated the individual remote controls to a box in the store room. It’s affordable convenience – no longer do you need to juggle between two to three remotes to get your entertainment on the telly, be it from the satellite decoder, DVD player or media player.

The Logitech Universal Harmony 300 Universal Remote helps to initiate a satellite-TV watching session in a very automated way. All that needs to be done, in my case, is to push a single power button while pointing the device in the general direction of the two appliances – the TV and the Satellite Decoder.

Which is great – just one button, no remote juggling! The remote then automatically resumes in Satellite Decoder mode without the need switch modes, and channel surfing takes place immediately thereafter just by pushing the channel up and down buttons.

It is automated convenience that a couch potato can definitely appreciate. 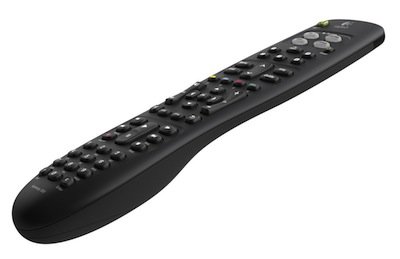 The Logitech Harmony 300 replaces up to 4 remote control units, and the models for thousands of appliance brands are factory built-in, with countless more downloadable from the manufacturer’s website. These new codes can be downloaded from the Logitech website to your PC, and then uploaded to the remote via a USB cable that connects to the micro USB port at the front end of the remote (see photos above).

The Logitech Harmony 300 also allows you to learn commands and codes from your existing remote controls if they are not found on the website, via a separate smaller IR port at the bottom of the remote (see photo below). I have had to do this with my Imation Media Player and it worked perfectly. Talk about remote brands of remote control!

The Logitech Harmony 300 Universal Remote used to retail for under USD80.00 but the price was reduced fairly recently.

The only problem I encountered with this remote was that some buttons registered double action with a single press, which can be frustrating when it comes to scrolling up and down a list of files in the media player.

The selection highlight on-screen would move two steps up or down, and the workaround for this is to point, click, and quickly point away from the appliance so that the second command would not be registered.

Fortunately, this was not the case with channel surfing. Anyway, this problem should be easily resolved with a software update.

The Logitech Harmony 300 Universal Remote is an affordable recommended buy if you love convenience and plan on reducing clutter on your living room coffee table. For those with a higher budget, there are other models with more advanced features such as touch screens to choose from. See the links below for suggestions.