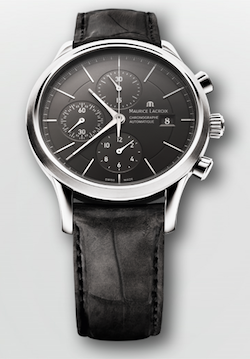 Maurice Lacroix – I had always wanted to own a watch by this Swiss manufacturer since I came across someone wearing one in 2006 when he came over to my office to do a presentation.

Over the years, I’ve kept a close eye over this brand, their releases and developments. A small solid steel emblem of the Maurice Lacroix resembling a Greek-letter “m” used to be emblazoned on the leather strap just below the lower lugs of the casing but sadly, this has been removed from all watch models [Update: I’ve found it!].

Nevertheless, the sleek and clean lines of these watches have always appealed to me as much as their simple elegance. As far as watches go, they are very reasonably priced for their pedigree.

So on 30th December 2011, about 5 years after that first encounter, I decided to reward myself with a Maurice Lacroix and satisfy this overdue longing.

I finally settled with the newer Maurice Lacroix Les Classiques Chronographe Automatique, a model released in 2011. I liked it for the complications on its face, the clean straightforward scale on the subdials, the juxtaposition of polished and brushed finishes on the stainless steel case, the beautifully-designed lugs, and the calf-leather strap and stamped deployant buckle – a jeweller’s artistry in a horlogerie package!

Here’s a little history about this brand extracted from Wikipedia:

Maurice Lacroix was founded as part of Desco von Schulthess of Zurich in 1975. Founded in 1889, Desco von Schulthess (Desco) is an older company with roots in the silk trade. Since 1946, Desco has also been a representative for luxury watches including Audemars Piguet, Heuer, Eterna, and Jaeger-LeCoultre. Over the years, Desco became more interested in the watch business, and in 1961 Desco acquired an assembly facility named Tiara in Saignelégier, in the Swiss Canton of Jura. There it produced private label watches for third parties. In 1975, Desco started marketing watches under the brand name Maurice Lacroix. Like other Swiss watch brands, including Rolex and Omega, the brand Maurice Lacroix does not correspond to any one individual.
By 1980, Maurice Lacroix had become so successful that the facility in Saignelégier ceased production for third parties. In 1989 Maurice Lacroix acquired the case maker Queloz S.A., also based in Saignelégier. This ability to produce watch cases in-house makes Maurice Lacroix unusual compared to other luxury watch companies.

During the 1990s, Maurice Lacroix experienced a “rocket-like ascent” with the launch of their high end “Les Mécaniques” line, later renamed the “Masterpiece” line.

During this time, the company elevated itself to the high ranks of Swiss watch manufactures, by both maintaining traditional ‘Swiss watch making art’ and by creating their own movements for its Masterpiece Collection.

As of 2010, Maurice Lacroix, has a total of approximately 220 employees worldwide, and is represented in around 4,000 shops in more than 60 countries all over the world.

“I liked it for the complications on its face, the clean straightforward scale on the subdials, the juxtaposition of polished and brushed finishes on the stainless steel case, the beautifully-designed lugs, and the calf-leather strap and stamped deployant buckle – a jeweller’s artistry in a horlogerie package!”

My Maurice Lacroix Les Classiques Chronographe Automatique (now that’s a mouthful!) was purchased at Sincere Fine Watches at The Pavilion Kuala Lumpur on 30th December 2011, then retailing at RM7,300.00. The price has since risen to RM8,600.00 as of mid-2012, just six months after I had bought it.

In fact, just a few months before the actual purchase, the people in the trade were already telling me of an impending 10% increase, to be expected some time at the start of 2012. That was a slight underestimate as it had actually gone up by 18%.

Allow me to present the unboxing of the watch…

To purchase this particular model or take a look at others in the Maurice Lacroix Les Classiques series, click here or see the links below.

What is your most reliable watch - Page 5

This watch looks great! I also appreciated your other post about swapping out the band. The older Maurice Lacroix band with the silver emblem definitely has a more sophisticated look.