I recently came across a flashlight whilst browsing the web, a flashlight which caught my attention because of its bold claim – a single LED with a maximum output of 960 lumens!

I knew then that my 210-lumen Nu-Flare Rebel 90 Flashlight was already very bright, and to come across one which also runs similarly on two CR123A batteries powering a single LED, but outputs more than 4 times that intensity, was something I just had to try and see for myself.

Even though I (really) had no need for another flashlight, it didn’t take long before I placed an order with Amazon.

Call it an impulse buy, but you will see why shortly, what makes the Nitecore SRT7 Revenger the much coveted flashlight that it is.

Read on for an in-depth review of the Nitecore SRT7 Revenger.

The delivery from Amazon was speedy – less than two weeks from order to travel halfway around the world. Seriously, it was a wait in eager anticipation, and when it finally arrived, I couldn’t wait to rip the package apart. Gently. Here goes!

Trying the Bundled Accessories on for Size!

Dimensions and Features at a Glance

The following is a summary list of features of the Nitecore SRT7 Revenger:

The Nitecore SRT7 comes in two colours – Law Enforcement Black and Military Grey. I was inclined to go with the Military Grey at first, but as I was buying online without a first hand feel of the actual item, I wasn’t sure how dark the grey will turn out to be.

I would prefer a very dark grey, and it’s hard to judge the various shade levels of grey from photographs available online. In the end, I decided to play it safe and go with Law Enforcement Black instead.

An important feature which I require in all my flashlights is that the tail switch push button can be depressed halfway for a momentary on operation. Fortunately, the Nitecore SRT7 works this way, unlike some flashlights in the market which require a full depress with a click in order to turn them on.

From experience, I find such momentary on switches such as the one found on the Revenger to be very useful and handy in real-world applications.

Other interesting notes on the head:

The crenulated bezel, when fitted, appears as shown left below.

Nitecore took the trouble to incorporate a power indicator light on the lamp head. This tiny and inconspicuous red LED blinks every 2.85 seconds when in standby mode (tail switch on, at 0 lumens). This serves to indicate that the flashlight is on or that the tail switch is already depressed and activated. The power indicator light will also blink when in turbo mode (tail switch on, at 960 lumens) to indicate that battery has reached 50% level.

The power indicator light blinks more rapidly (once every 0.08 second) to indicate a weak battery, as shown:

The Crux of the Nitecore SRT7 – The Smart Selector Ring

“The Smart Selector Ring makes selecting a function straightforward, and more importantly, keep that function activated for the next operation after a switch-off.”

One of the main reasons which prompted me to go ahead with the purchase of the Nitecore SRT7 was its Smart Selector Ring.

The Nitecore SRT7 is one of the few flashlights in the market to feature selector switches that activate its various functions. This makes it very convenient for any one of the flashlight functions to be selected at any given moment. Most other multi-function flashlights currently available today offer fewer functions, and involve complex multi-button sequence of presses to activate each of its functions.

The Smart Selector Ring makes selecting a function straightforward, and more importantly, keep that function activated for the next operation after a switch-off.

In flashlight mode, the ring clicks at three positions – the first is on standby mode at 0 lumens, the second allows the flashlight to be adjusted at varying levels of brightness from 0 to 960 lumens smoothly like a rheostat, and the last click turns on the turbo mode, switching the flashlight on at its maximum brightness at 960 lumens.

This is best summarised in the diagram below from the Nitecore website:

The Smart Selector Ring on the Nitecore SRT7 is actually a third generation technology, an amalgam of the first two generations used in previous flashlight models. 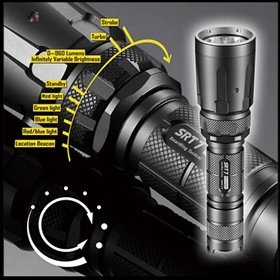 The Smart Selector Ring is an innovative and indispensable feature on any multi-function flashlight, a technology which is certainly well-implemented on the SRT7.

RGB on the Nitecore SRT7 – LEDs in Red, Green and Blue

The Nitecore SRT7 also features three tri-colour LEDs within its lamp reflector. The photographs below show the LEDs operating on each of the three colours, taken with my camera under normal daylight.

Each of these colours serves different functions and purposes, which the outdoorsman will quickly appreciate.

Activation of these colours on the circumferential LEDs depends on the switch position on the Smart Selector Ring as discussed above.

The Nitecore SRT7 Revenger also features beacon and strobe functions, activated on each extreme end of the Smart Selector Ring.

The location beacon is useful for indicating one’s location whilst in a convoy, or when lost in the wilderness or at sea, while the strobe function attracts immediate attention to signal for help at sight. The location beacon blinks at near maximum brightness once every 2.1 seconds and consumes less power than the strobe, which blinks similarly but more rapidly at once every 0.03 seconds.

To gauge the power of the rated 960 lumens, the SRT7 was best tested outdoors at night.

The following test was conducted at 5.30 am in near pitch-black darkness just outside of my balcony. A Nikon dSLR D3100 mounted on a tripod (right) was used to capture the images of illumination on the test subjects. Two test subjects were selected – a tree at about 60 feet away, and a farther tree at about 102 feet away. These distances were measured from the balcony with a Bosch Laser Rangefinder GLM 80 Professional. There was some stray light from a nearby light source, but this did not reach the farther tree at all, as seen in the photos below.

The first photo below shows the darkness of the environment, as well as the distance of each of the two test subjects hidden in this darkness. The next photo shows how these test subjects vary in appearance, from within darkness to being illuminated with the full force of the 960 lumens emanating from the Nitecore SRT7.

As seen in the photo above, the Nitecore SRT7 running at its full 960 lumens was bright enough to pick up rather good detail on the farther tree at over 100 feet away. The naked eye actually captures this better than can be seen in the above photo. You may need to increase the brightness of your computer screen to see what it’s really like.

The Nitecore SRT7 features an overheating/failure safety control, which automatically switches the flashlight to high mode after three minutes of continuous use in turbo mode. In this case, turbo mode can be reactivated by slowly rotating the Smart Selector Ring or pressing the tail switch.

The Nitecore SRT7 boasts an Ingress Protection rating of IPX-8, and is waterproof and submersible to a depth of up to 2 metres. I decided to take the next test to a swimming pool.

The Nitecore SRT7 passed the underwater tests with flying colours and had shown itself to be extremely capable in day-to-day tasks.

Despite running on only a single 3.7V, it proved to be more efficient than the Underwater Kinetics SL4 eLED which ran on 4 “C” cells to a total of 6V.

Also, I must say that the Smart Selector Ring was well-designed and certainly well-implemented on the Nitecore SRT7 – allowing any one of its seven functions to be deployed at a moment’s notice.

As an all-in-one flashlight, the Nitecore SRT7 presents overall great value, and quality is evident in its manufacture as well as in the bundled accessories.

A fresh set of 18650 battery isn’t something you can get off the shelf, and the CR123A batteries may be quite hard to find at remote locations, be it leisure or an expedition. Best to carry some of these rechargeable batteries and a charger, provided that power source is not an issue!

To purchase this flashlight and other accessories such as the crenulated bezel, please click on the links below.

FLASHLIGHT MODELS FROM OTHER MANUFACTURERS

Is a ‘Revenger’ someone who wants to take revenge on others?

Can you compare Nitecore against the Wicked Lasers torchlight.. http://gizmodo.com/5054103/lightning-review-the-wicked-lasers-torch-flashlight-can-burn-paper