I went to Singapore in February 2015 with the aim of getting a Victorinox wallet…and that I did.

There are a few items which makes shopping in Singapore fun, and wallet is one of them. There are a few specific things I required in my next wallet:

Not many criteria, but rather specific ones. Problem is, Victorinox don’t make so many wallets fitting those desriptions, and the one I came across which closely fit the bill was the Victorinox Calgary wallet.

Surprisingly, this item is no longer listed on the Victorinox website – it could have been discontinued. I will try and describe it below. 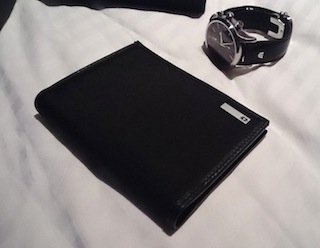 The Victorinox Calgary wallet is made of nylon – not ballistic – but plain nylon, which makes it thinner than the ballistic variety.

At this stage, considering the bulk I have to carry with me every day, thin is a much-desired attribute.

Victorinox make a number of wallet models in leather and nylon material, but this bi-fold wallet has to be one of the lowest profile.

The Victorinox Calgary wallet was sold for SGD96.00 (MYR250.00) – not the cheapest of wallets, at least not for the material (nylon) class, but if the quality is anything to go by as far as what Victorinox are known for, then the price may just be alright.

I will post photos of this wallet, empty and filled, for reference purpose. The pockets on the Victorinox Calgary wallet started off tight – cards were a snug fit, too snug at times.

As time went by, the material stretched a little and the pockets became a better fit for the cards.

“As time went by, the material stretched a little and the pockets became a better fit for the cards.”

The coin pocket is located within the bi-fold on the inside of the wallet. I find this to be a disadvantage, as an internal pocket would make the wallet harder to fold close if there were too many coins, and especially if the other internal pockets were to hold many credit and ID cards.

For this reason, an external coin pocket would be more practical, that is, if a shiny zipper on the outside doesn’t get in the way of style and design intent.

Get It on eBay
“Surprisingly, this item is no longer listed on the Victorinox website – it could have been discontinued.”

My love for Victorinox stems from the long-term affection I have for their knives for the last 30 years since the mid-1980s, which culminated in The Devon Buy Collection of Victorinox Swiss Army Knives.

The Victorinox Calgary wallet is difficult to source these days, but Victorinox do offer a number of other wallet models to choose from, all bearing the quality that Victorinox are known for.