This is a collage of the Spyderco Byrd Cara Cara 2 BY03PSBK2 , with photos and description of this knife.

I was in the process of buying a couple of Spyderco folding knives when I came across this Spyderco Byrd Cara Cara 2 at rather good value. The Byrd series is Spyderco’s line of best value folders, and in the case of the Byrd Cara Cara 2, has undergone a number of upgrades and improvements – a reengineered version of the original Cara Cara 2 Lightweight.

Two immediate obvious differences since the upgrade are the blade grind and the handle texture.

My Cold Steel Hold Out I and Hold Out II are similar examples of this type of blade grind.

Another noticeable difference is the handle texture. While the previous model already offered adequate grip in its fiberglass reinforced nylon (FRN) handle, the new Spyderco Byrd Cara Cara 2 is designed with a bi-directional textured handle made of similar FRN material for enhanced grip and control.

The texture is such that the traction is more aggressive away from the centre of the handle, and the thumb and fingers feel this depending on which direction of the handle they are pushing against. See photos below.

It is also easy to notice how this bi-directional texture resembles the feathers on a bird, like plume on a Byrd perhaps? Depending on how you see it, they sometimes resemble scales as well.

Another upgrade, though not immediately apparent, is the inclusion of phosphor bronze pivot washers for smoother blade swivel open and close. Not bad for a budget line folder!

The blade is a decent 8Cr13MoV stainless steel, which offers a good balance of edge retention and rust resistance. It is also easy to sharpen, making it an ideal overall working knife.

The blade comes with partial serration along half its cutting edge, which will prove useful when cutting through fibrous material like seat belts, nylon straps and ropes.

The blade is deployed by the Byrd series trademark comet-shaped hole.

While Spyderco may term this hole to be shaped like a Comet, I tend to think of it more like the shape of a bird head, with its recognisable protruding beak. After all, it is the Byrd series, and the handle texture already resembles bird feathers. But comet-shaped probably sound better than bird-head-shaped, and definitely the better option for marketing reasons.

The blade lock is provided by a lockback, which incorporates the David Boye’s dent on the locking lever to prevent unintentional release of the lock in the event the knife is gripped too tightly. This feature is also found on the lock bar on the Spyderco Salt I folding knife reviewed earlier and works well as intended.

There are also two finger choils found on the knife – one on the handle, and another on the blade near the ricasso region. The finger choils allow resting place for the forefinger for better control of the knife in whittling and scraping cuts.

The use of lockback and blade hole for blade lock and deployment makes the Spyderco Byrd Cara Cara 2 an ambidextrous folding knife.

Furthermore, the knife is provided with pocket clip screw holes at four locations, making this knife configurable for right-hand or left-hand and tip-up or tip-down carry. The pocket clip is an hourglass-shaped stainless steel bent clip and works well. 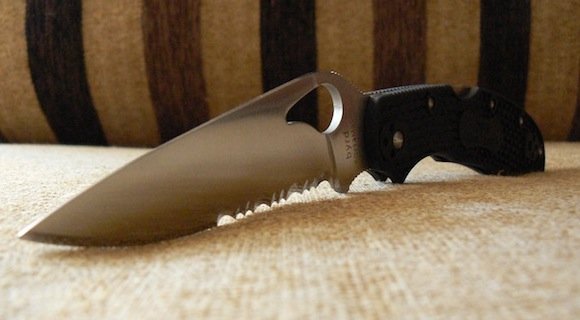 This gritty texture is felt mostly by the fingers (especially the thumb) where touch is more sensitive if compared with the palm. Hence, I found this knife to be better handled “within the palm” than “on the fingers”.

Personally, I still prefer the feel of the Volcano Grip texturing found on the Spyderco Salt I FRN handle.

“…that means no stylish finger blade flicks with this knife. That’s ok.”

If there is one unfavourable thing to pick on for this knife, it’s the comet-shaped thumb hole. While it may be a trademark feature of Spyderco’s Byrd series of folding knives, flicking the blade open with the fore- or middle-finger, what is popularly known as the Spyderco Finger Flick, is near to impossible with this irregular-shaped hole.

This hole tends to scrape the nail on the action finger quite deeply, making it a rather futile attempt. Nevertheless, the blade opens smoothly and very well with the thumb. That means no stylish finger blade flicks with this knife. That’s ok. 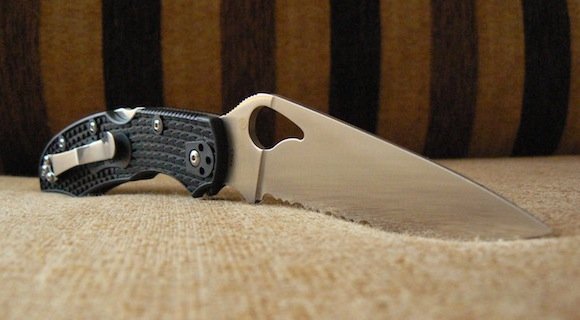 The Spyderco Byrd Cara Cara 2 comes incredibly sharp out of the factory.

At less than 100 grams, it is an incredibly lightweight knife. A durable handle coupled with a decent blade steel at a highly affordable price (see links below) all make the Spyderco Byrd Cara Cara 2 a tough contender in the range of value folders, if the above issues can be overlooked.

OTHER FOLDING AND FIXED BLADE KNIVES