If you’re like me, you’d love 2D scrolling games which feature an aircraft with increasing power as the game progresses. Think Raiden! Oh, the number of quarters I have lost to that arcade machine… 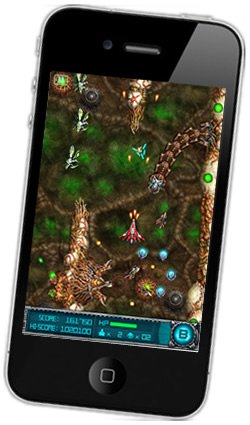 In Year 2036, the Earth’s population has reduced to only 1.5 billion due to resources shortage and global climate warming. The bizarre climate is somehow suitable for the aliens to move in. These aliens can attach to any organism or machinery to evolve into new forms of life. The Earth has unfortunately become their second home. The human beings must act fast to destroy the aliens before they conquer the whole world. The Earth Alliance secretly sends a fighter equipped with the ultimate and most advanced weapon, called “Super Laser” to the aliens stronghold…

Advertisement
“If you had enjoyed Raiden very much at one time, then this is a must-have!”

Super Laser: The Alien Fighter brings the same Raiden experience to the iPhone. If you had enjoyed Raiden II very much at one time, then this is a must-have! There are 7 levels of aliens to vanquish in all, each ending with a tough boss that is easily underestimated. If you think they are easy, select hard for level of difficulty.

“At the start of the game, basic firepower is all you get.”

There are 2 different planes to choose from, each with a set of bombs and shield that works differently. There are 3 choices of ammunition, but these are selected and altered as you progress along the game by shooting an enemy craft. At the start of the game, basic firepower is all you get.

Get It on eBay
“…until you reach the grand battle on Level 7.”

As much as Raiden had taken up my quarters, Super Laser is sure to take up your time as you try to move from level to level, killing bosses until you reach the grand battle on Level 7. Totally engaging!

Super Laser: The Alien Fighter is available on the App Store for only USD0.99 and it’s worth every penny. A Lite version with only the first level is available for free download if you want to feel how the game plays. But it is almost certain you will want to play the next 6 levels once you’re done with that. Good luck!