The following article is a preview of the Ryobi P514 18V One+ Reciprocating Saw as it has not been personally used, and is intended to be an info page with some description, photographs and technical specifications as provided by the manufacturer. 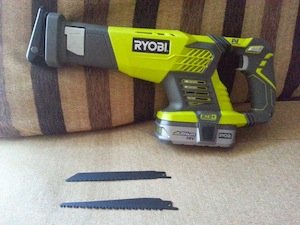 Seriously, a reciprocating saw is one of the last few power tools I should buy, for two reasons.

First, I don’t do much sawing work in the fashion a reciprocating saw is normally made use for, and second, any quick sawing work I needed to do could be achieved with the Milwaukee M12 Hackzall already in my position.

Still, in the end, I somehow found myself buying the Ryobi P514 18V One+ Reciprocating Saw.

Advertisement
“…I specifically run mine on a P103 lithium-ion battery for optimum weight-to-power performance.”

I bought the Ryobi P514 not out of need, at least not immediate but foreseeable, and in an endeavour to build an arsenal of cordless power tools.

I was already on Ryobi’s 18V One+ series, having invested in some 18V lithium-ion battery packs and a specially modified charger to work with my local 220V power supply.

These didn’t come cheap, and the value of these batteries could be enhanced by increasing the number of power tools that could be powered by them.

So with this in mind, I felt that the Ryobi P514 Reciprocating Saw was the next best thing I could buy.

Running a reciprocating saw on battery DC current also means safety against electrical hazards when working in wet areas outdoors (where I foresee this tool to be used most e.g. pruning tree branches), and without the need to search for a power outlet, which incidentally, doesn’t grow on trees. Safety and convenience are key issues here.

“As far as efficiency is concerned, a higher stroke speed plays a more crucial role than stroke length.”

The Ryobi P514 Reciprocating Saw is equipped with a variable speed trigger that allows its user to control the speed of stroke depending on the nature of work and material to be cut.

The stroke of the saw can oscillate up to a speed of 3,100 strokes per minute without load, and slower strokes could be achieved for the careful and near-finishing cuts.

It is interesting to note that the saw blade stroke is only 7/8 of an inch, but that is all that is needed for an effective saw cut. As far as efficiency is concerned, a higher stroke speed plays a more crucial role than stroke length.

Another important feature is the built-in electronic brake, which stops the saw from operation upon release of the trigger switch. This prevents errant and unintended cuts into the work material at the end of a cut line, as well as accidental cuts into flesh once the trigger switch is released.

As always, caution should be exercised when dealing with power tools of this nature.

Working with a reciprocating saw is bound to generate a lot of vibration, which could lead to fatigue and discomfort over prolonged use.

The P514 is fitted with isolating flexible joints and a unique Anti-VibeTM handle for a more comfortable experience, with a GripZoneTM rubber overmold on the handle to provide more than adequate traction and grip to prevent slippage.

The trigger switch rests nicely on the D-handle for comfortable usage, with a lock-off button located just above it on both the left and right side. This button prevents the accidental starting of the tool, and needs to be depressed on either side before the trigger switch can be depressed.

Like many of Ryobi power tools in the One+ series, the use of ancillaries is reduced as much as possible.

It is recommended that the battery pack is first removed with every installation, removal or change of saw blade to prevent accidental starting of the saw.

The front end of the Ryobi P514 is fitted with an adjustable shoe, which can be extended and tilted to suit job conditions and the work material.

An adjustable pivoting shoe that is pressed against the work surface allows for a controlled depth of cut, as well as more efficient use of the blade. A non-moving part of the tool in contact with the work surface prevents the movement of the saw during cuts, and ensures that every stroke of the saw blade removes the quantity of material it is designed for.

To extend the pivoting shoe, the use of a hex wrench is required, and Ryobi, as always, have managed to find a clever way of keeping this tool on the P514. The hex wrench is cleverly hidden and stored near the battery compartment, and is always within easy reach. One less worry about missing or misplaced tool.

The following information with regards to usage and safety is extracted from the operation manual. It also shows how the P514 could be used and applied. 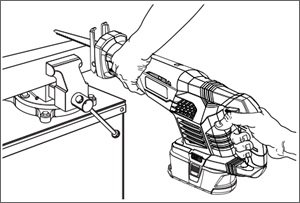 Hold the saw firmly in front of and clearly away from you. Make sure saw blade is clear of any foreign material. Be sure material to be cut is held firmly.

Small workpieces should be securely clamped in a vice or with clamps to the workbench or table. Mark the line of cut clearly. Depress the lock-off button, then pull switch trigger to start the cutting action. Place the base assembly against the work, then move the blade into the work. Do not force. Use only enough pressure to keep the saw cutting.

Let the blade and saw do the work. Use of excessive pressure that causes bending or twisting of the blade may result in broken blades. 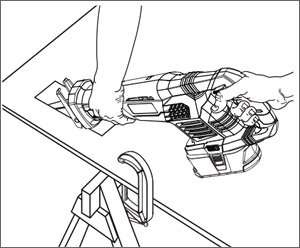 Mark the line of cut clearly. Choose a convenient starting point inside the area to be cut out and place the tip of the blade over that point. Rest front edge of base (shoe) assembly on work and hold firmly in position. Depress the lock-off button, then pull switch trigger to start the cutting action. With saw blade at full cutting speed, slowly tilt saw downward until tip of blade starts cutting work. After blade penetrates work, tilt saw until blade is perpendicular to the work. 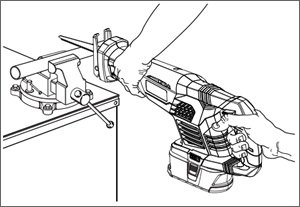 Metals such as sheet steel, pipe, steel rods, aluminium, brass, and copper may be cut with the saw. Be careful not to twist or bend the saw blade. Do not force.

Never use gasoline since normal sparking of motor could ignite fumes. Clamp the work firmly and cut close to the clamping point to eliminate any vibration of the work being cut.

When cutting conduit pipe or angle iron, clamp work in a vice if possible and cut close to the vice. To cut thin sheet material, sandwich the material between hardboard or plywood and clamp the layers to eliminate vibration and material tearing.

“…the design and ergonomics of one such as the Ryobi P514 make it more suitable for certain applications such as sawing and cutting into lumber, plywood, wood panelling and drywall…”

While a mechanical saw such as a jigsaw or hackzall can potentially achieve the same effect as a reciprocating saw, the design and ergonomics of one such as the Ryobi P514 make it more suitable for certain applications such as sawing and cutting into lumber, plywood, wood panelling and drywall, all for quick and efficient removal of material.

It could also be used for sawing metal sheets, pipes and steel rods. A reciprocating saw just allows for comfortable two-handed use for better control especially for structural work, and material removal and cutting at high places. 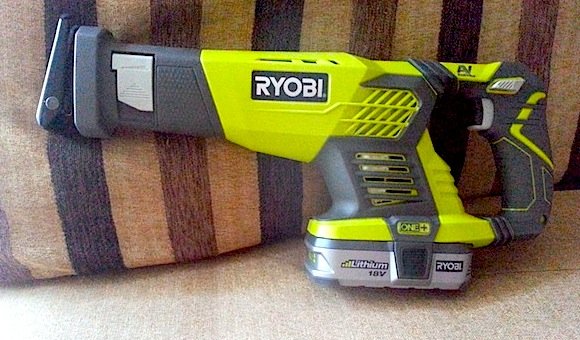 RYOBI 18V ONE+ ACCESSORIES AND TOOLS

RYOBI 18V ONE+ BATTERIES AND CHARGERS