When I finally got my first iPhone, my first and foremost fear was that I would not be accustomed to the tiny QWERTY keys on the soft-touch keyboard.

I was looking for a T9 simulator for the iPhone, T9 because I had been so used to T9 predictive text input on so many Nokia phones over the years. However, I failed to find any for the iPhone. At least at time of writing, when the iPhone 3GS was first launched.

“…key inputs are only registered on the screen when the typing fingers and thumbs are lifted off the keyboard, and not upon keyboard touch contact…”

I decided to give the keyboard a shot. Someone from an Apple Premium Reseller Store gave me a good tip. He said to just place my thumbs (no matter how fat they may be) down where the keys are, and worry not about hitting them accurately.

True enough, iPhone’s inherent spell correction does a neat job of getting the words typed out right, nearly all the time. Often enough to call it reliable.

Typing on iPhone is quite easy, really…

“…iPhone’s inherent spell correction does a neat job of getting the words typed out right, nearly all the time. Often enough to call it reliable.”

iOS device users should note that key inputs are only registered on the screen when the typing fingers and thumbs are lifted off the keyboard, and not upon keyboard touch contact as most would naturally assume. This would enable one to change or correct the input simply by dragging your finger from the erroneous key to the correct one, and then lifting off.

However, when you’re typing fast and going at the keyboard at split-second speeds, you would not have the time to correct inputs this way. Hence this is rarely used to correct key inputs by fast typist, and it is more the way the soft on-screen keyboard works rather than a typing tip. But it is useful to know, and if your eyes and instincts are fast enough, you would know to move your thumbs quickly from an accidental “m” to “k” when typing the word “take”. 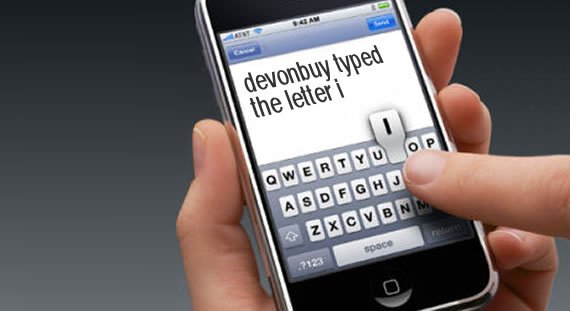 Get It on eBay
“…more often than not, you’ll find the correct word spelt out upon the spacebar click.”

Initially you may want to start easy by pecking the tiny keys with one or both forefingers, with the iPhone placed flat on the table.

Eventually, you will realise that the only way to speed type on an iPhone is to thumb type.

And don’t underestimate yourself. With practice, most people find this achievable after only 3 days of messaging. The less talented amongst us might take a little longer, but eventually we all get there.

So go ahead. If you had just recently purchased an iPhone, start messaging with both your thumbs. Place your thumb tips roughly where the intended keys are, and more often than not, you’ll find the correct word spelt out upon the spacebar click.

And that is plainly satisfying as far as instant messaging goes!

For extensive typing, there is always the Bluetooth keyboard that you can take with you (which I do), if you’re writing your novel or blogs with your iPhone or iPad: